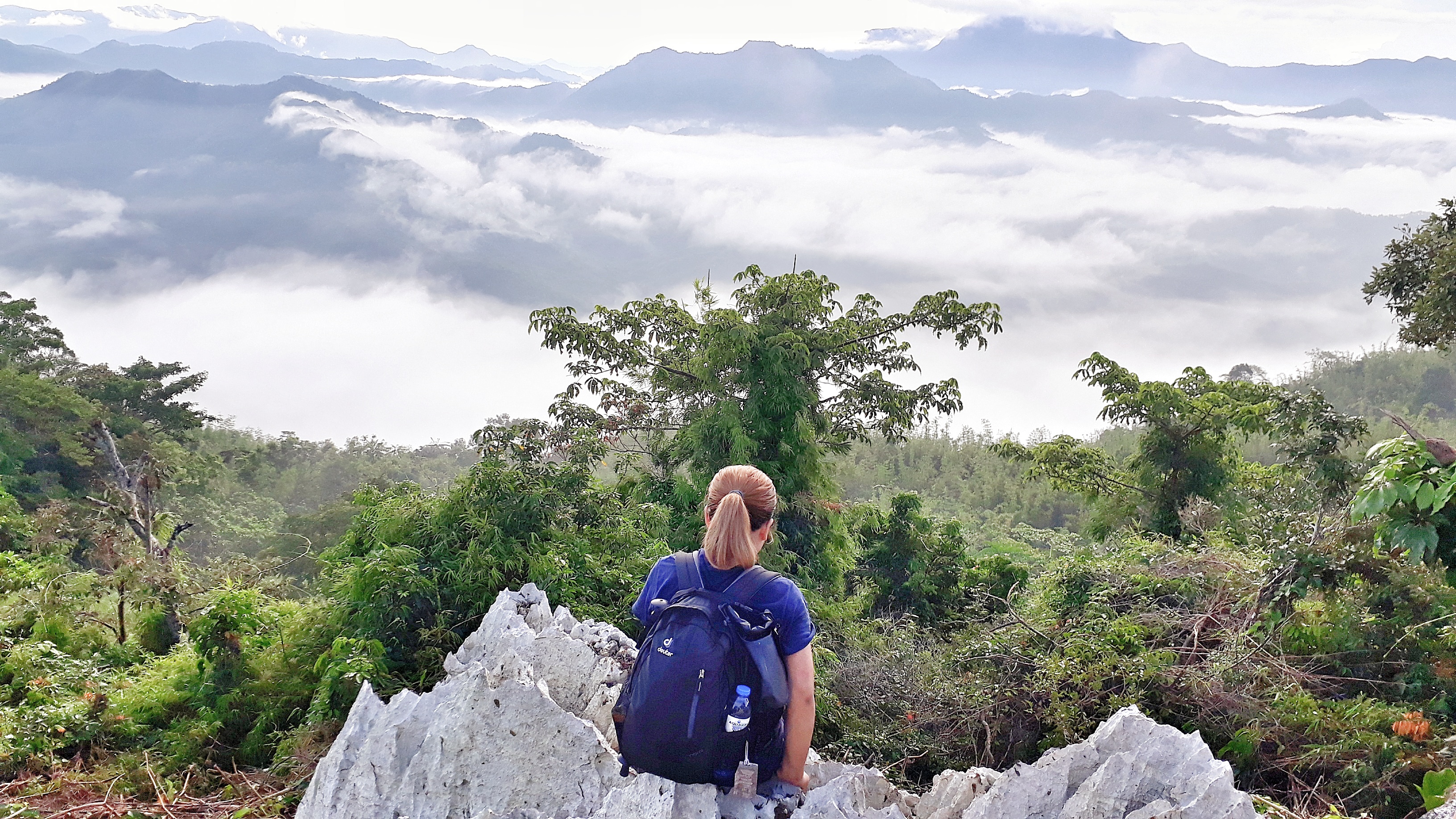 Every time I’d hear either a lonesome buddy or a group of people claiming to have traversed the wilderness and assaulted a summit, I’d wonder what’s in the mountains that draw them in euphoric spell. I didn’t understand much the celebrated thrill, the so-called fulfillment, the close camaraderie until I hiked Mt. Mapalad at San Andres, Tanay, Rizal just recently.

Mt. Mapalad, a newly discovered trekking destination, is 700 meters above sea level (MASL). Allegedly, it is a beginner’s hike with 3/9 difficulty. From the jump-off where you will meet tour guides for a fee, the trek is two (2) to three (3) hours, depending upon your pacing, to complete the eight (8) kilometers distance to the summit.

The hike began in the dark of dawn, some 30 minutes past four. A flashlight or headlamp is one of the essentials. However, I had to use the torch on my phone because I was so keen that I missed such great detail. The group was divided into three. I tagged along the sweeper for two reasons: First, I liked it at the back, like behind the sweeper herself. I could scare myself of the dark, take my time without getting anyone’s attention or get the view I’d love to indulge in. And second, I don’t want to become a liability as regards pacing.

Did I really get it right that Mt. Mapalad is a beginner’s hike? Or was it because I sensed that the group I joined happened to be composed of seasoned hikers? Yes, they’ve been here and there. So, it was like, oh, okay, go ahead! I kept up though according to gracious pacing. For one, why hurry when I could make the climb enjoyable? More particularly, I came to feel nature, to commune with its goddess, to seek healing and deliverance. So, to stress myself about anything, even a single little thing, wasn’t in my to-do-list.

I learned that it had just rained. As my feet, strapped in hiking sandals, tossed fogs along the trail, I could hear the nagging of frogs from a distance. I felt the chill of the icy air that draped my half-frozen body. We passed through neighborhood dwelling in huts. They were beautiful, particularly how they stood composed in the silence of the dawn. The serenity was like music, which rhythm struck my soul and inspired my heart to beat spelled but hushed poetry. Then as my mind raced a thousand miles, I heard the soothing sound of rushing waters. I was amazed of such body of water called Kinabuan Falls. Mt. Mapalad is lucky to have streams and rivers on the way to its summit.

We crossed rivers, treaded rocky fields and hopped muddy slopes. And yet, we weren’t halfway. I began to question myself what exactly was I doing? Honestly, I could mistake myself for a masochist. I ran for breath as perspirations trickled down my forehead. I could have actually given up had it not been due to the close assistance of the organizer and the mountain guides (plural, OMG! They were two).

There were moments during the trail when I wanted to tell them to just carry me. “Are you out of your mind? Hey! No one forced you to hike!” The situation convinced me of the truism that life is hard, and it’s how I react towards it that makes the journey light and worthwhile. So, I resumed the climb. It dawned in me that difficulties are blessings in disguise. I just have to keep up and make the best of the moment. And most importantly, I learned to become more grateful.

I was the happiest when we reached the summit. Whether I’d want another hike, it was in the affirmative. I’d love to witness another adventure, become part of a happy story, and discover more about the magnificence of the Divine creation. So, as we descended Mt. Mapalad, I could sense a renewed spirit in me. Then I saw a cliff. I wasn’t sure. It was like magnet drawing me near. I got hypnotized. I jumped and hit the waters hard.