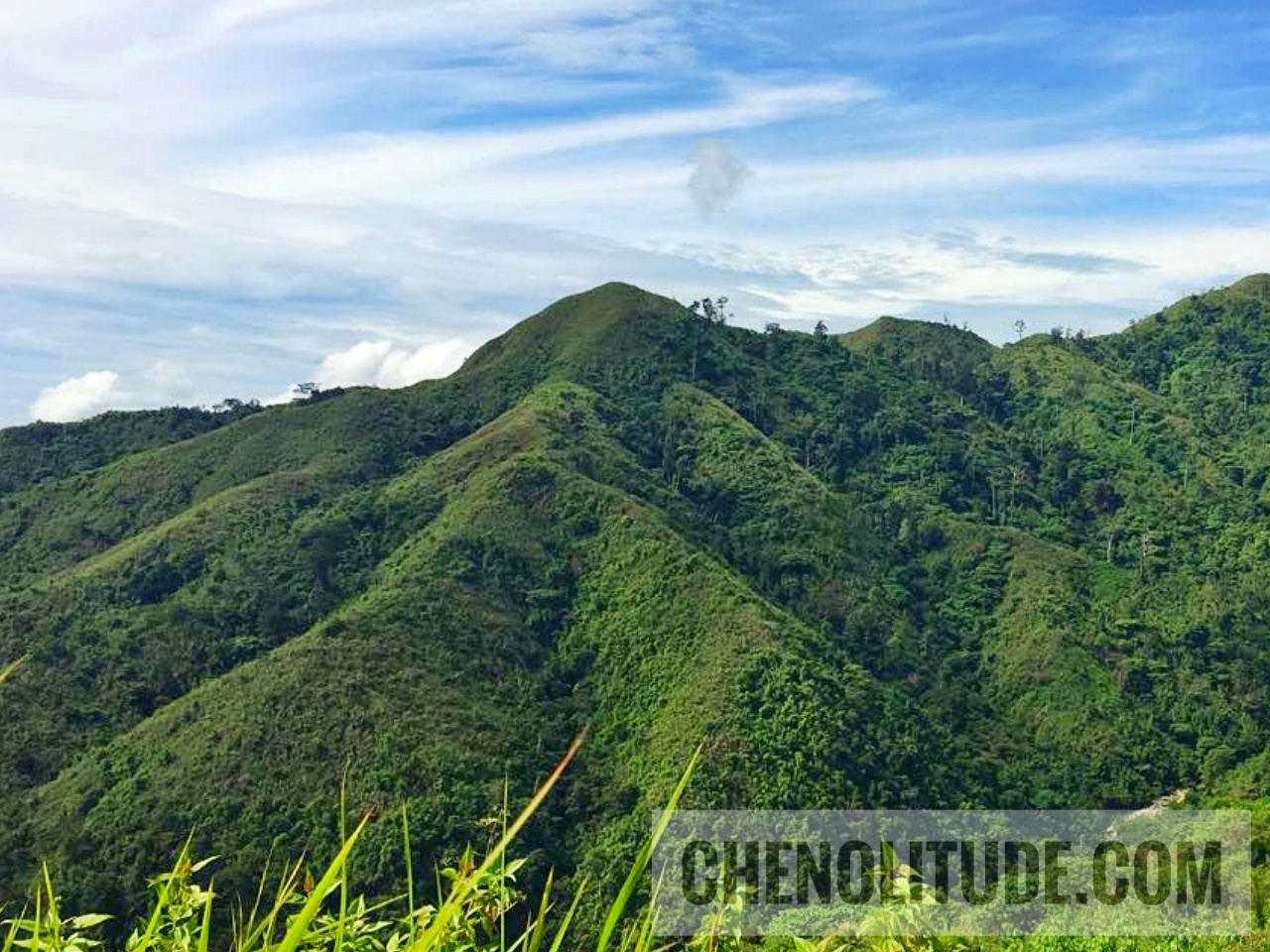 “The mountains are calling. I must go!” Previously, I’d be content in spending most of my weekends with a book in the comforts of my place until a window opened for me. The mountains, which the Philippines has multitude of, picket around the solitude of my haven. Mt. Damas caught my initial interest.

Located in the boarders of three towns of Tarlac, namely Mayantoc to the Southeast, Camiling to the North, and San Clemente to the West, Mt. Damas is considered a major climb, which may be attacked either via Brgy. Papaac, the usual trail in Camiling, or Dueg Resettlement, the traditional one in San Clemente. It has 6/9 difficulty level although 685 meters above sea level (MASL) only. The trail to the summit, which is more or less 45 square meters flat, is breathtakingly 45 to 60 degrees ascend and descend. What makes it even more enchanting?

The trek consists of almost perpendicular rock rappelling and frequent river crossing, some portions of which have strong currents. See how exhilarating this must be to thrill seekers? Yes, except that you have to be very careful. There’s no harness and if you fall, that’s final. (YOLO!) Moreover, the summit may allegedly be reached by four to five hours hike. Mostly covered by sharp cogon grass and some trees, the hike is better made on sunny days as the red-brown soil could be so muddy that slipping would be the natural course of trekking (I could presume because you aren’t Spiderman, right?). Similarly, you could foresee the logical consequences of heavy rains, as is the trend in a tropical country like PH.

So, the sun was already mad at eight in the morning when we began the hike via Dueg Resettlement. By the way, while the actual trekking begins from the jump-off, you’d still have to walk some three kilometers from San Clemente to Dueg. We did at 15 past five. It’s actually like Mt. Damas’ give away, warming you up, drawing you closer to him while encouraging you to have a good rapport with your buddies, enticing your senses of the overview while sizing you up at the same time. But because you have prepared for the hike, knowing that it’s a major one, you could shrug off the three-kilometer walk, including other petty things.

Oh, did I tell you that I already have friends in the vast mountains? It delights me to find people who share interests like mine. Take it or leave it, but you only leave once! In the end, no one comes out of here alive. So, why not play hard when you aren’t at work? Wouldn’t it also be interesting to write about something new, build new networks, and spice up reality? Given the 360 degrees view overlooking nearby provinces, the wonderful scenery will take your breath away, and set your mind to its default setting, peaceful and sharp. Likewise, you will remember how your professors taught you subjects like Property, Environmental Law, and Land Titles and Deeds, and how you stole time in the office to read both the annotations and cases. (LOL!)

“Mt. Damas, handa ka na ba?” my new-found friends and I would shout in unison every now and then. Then we’d laugh. We’d be proud of success stories and laugh at epic fails. We’d plan more mountains to climb and more stories to tell. Until shouting, laughing, and talking became rare. We could only look at one another and pat each other’s shoulder, making sure everyone’s okay. Hour after hours passed. I’d wonder when would the organizer’s “it’s just an hour to the summit” come to an end. The sun was so mad that I hardly could speak. I could only feel a burning sensation on my face.

My mind drifted back to my place. On a very typical weekend, I’d awake almost freezing. I’d turn off the aircon, brew coffee and cook hotcakes. I’d turn the AC on again, then get lost between pages. “See? You’re a water person!” my mind quipped. “Why are you really here?” I forced to get back to my senses. As I embraced such kind of reality, I learned that we were lost in the wilderness. There was no trail to the summit, and the organizers were mum about it. It came to our knowledge that it had actually been a year since they climbed Mt. Damas.

Yet, they didn’t hire a guide knowing that heavy rains remove the trails, and cogon grass grows towering easily. I could only think what issues these organizers got into with the locals, as we’d heard. There was never an apology to us. My friends and I could only look at one another and stay composed. Suddenly, a local-looking guy, I think in his late 40s, appeared. He was carrying a shiny bolo. He scanned all the faces he could see around him. Some smiled at him. Others began conversations with him. I tried to hide my face discretely by lowering my cap. The local treaded ahead and struck his bolo with all his might, left and right, at the shrubs and cogon grass. Thus, creating a new, fresh trail. We followed him.

I realized that we were alone traversing Mt. Damas via Dueg that Sunday. We hadn’t come across any hiker or a group of them. However, I wouldn’t want to think farther, and for whatever cause we were fighting for, I simply wanted to get to the summit, document it, then descend so I could go home, take a shower, sleep hard, and attend the flag ceremony early the next day. As the ascend demanded more of our energy and became surprisingly uphill, I felt that I was losing my senses. Everything appeared like rotating around me. I fought it hard, and reminded myself that I couldn’t collapse when everyone was just surviving and simply trying to finish whatever we call it.

We reached Mt. Damas’ summit past three in the afternoon. While the five of us waited in the summit for the two of our buddies to reach the same, we took a breather, enjoyed the view, and posed for photos. Before our two buddies could arrive at the summit, the organizers could no longer be found. We just couldn’t believe such fact. OMG! So when our two friends arrived, each of us five volunteered immediately to take their photos in the hopes that if we do it very quickly, we’d outrun the organizers, or just brush elbows with them. However, we could only hope for it.

Fortunately though, the local guy stuck with us. So, the seven of us concurred that we’d head no more to the Cardiac Trail and the Ubod Falls as it was already dusk. The darkness covered the sky swiftly as we took the life-threatening rock climbing overlooking deep rivers, the alleged shortcut to the jump-off, where the van must wait for us. It was like a point of no return. With numbing legs and palpitating hearts, we took the risk in silence. We could only pray and summon our patron saints, as we took careful steps against the rocks. Past nine in the evening, we were still trailing to the jump-off, where we saw the organizers partying.

My friends and I wrapped up in deafening silence. “So ano, Mt. Tapulao na this weekend?” one of us teased. We all laughed as we found our designated places inside a white Grandia after a quick bath. We reached Manila 30 past three in the morning the next day. So, while some people can be so mean and unkind, you can always delete them in your memory, without forgetting the lessons, which the situation taught you. For one, you don’t allow anyone to get a hold on your happiness, and you don’t subscribe to a culture that has reached no refinement and civilization.

Likewise, while my first major climb was a traumatic experience, giving me goosebumps whenever I remember it, quitting is such a foreign word in my dictionary. And while I (we) declined a challenge for a rematch with Mt. Damas to beat the Cardiac Trail and see Ubod Falls, it was because once is enough, twice is too much. Besides, there is so much to see in the Philippines, and I want to live happily ever after for a century or two.