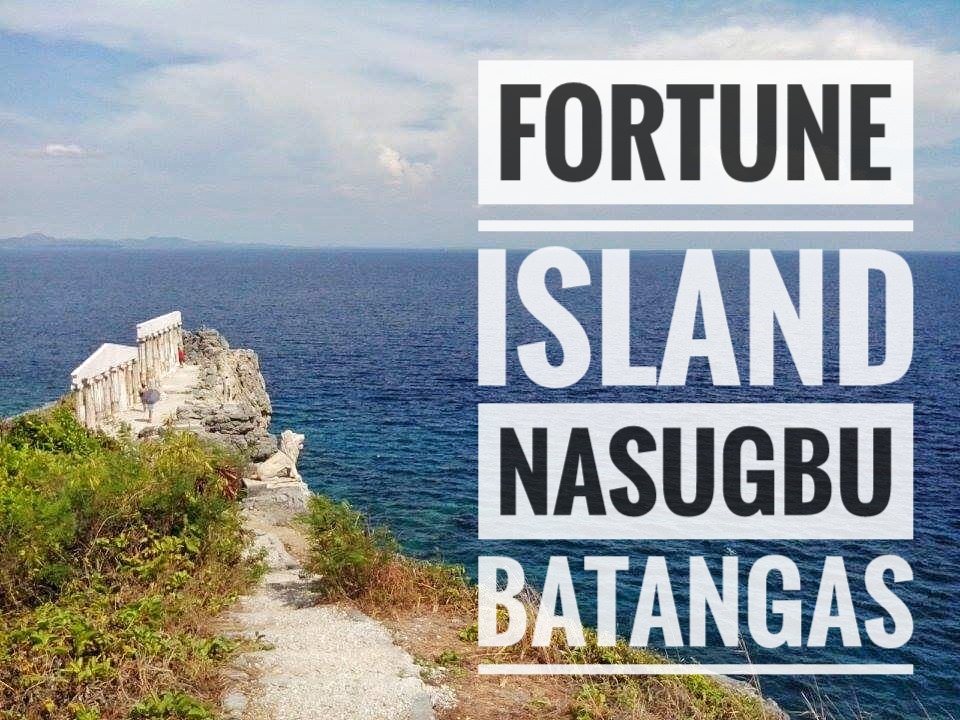 Fortune Island lies off the coast of Nasugbu, Batangas. It is adjacent to the West Philippine Sea, formerly known as the South China Sea. This island can be reached through an hour and hired boat-ride. The ride is a tough one due to its geographical location.

Fortune Island offers a Greek-inspired venue and haunted-styled getaway, which are ideal for photoshoots. Would you like your pre-nuptial pictorial taken in this secluded and barren island? While it sounds interesting, the main activities in Fortune Island involve the pristine and glistening waters. They include cliff diving, snorkeling, and swimming.

If you love going to the beach without dipping in the waters per se, bring in anything that produces shade. Fortune Island has not much of it. Tent is an example. As I communed with desert-like nature along its shores, I wondered why it was named Fortune Island. It has no livable facilities, such as clean and unsalted water (at least for shower), electricity, and a place to stay (at least a nipa hut). It appears like a forsaken island, one without any structure except for the pillars, Fortune Island is known.

Such immensity, which captured my gaze, Fortune Island has, nonetheless, a lot of visitors. They appear like in delirium adoration at the feet of the island’s pillars. Others pose with too much effort, like those photos would be a scoop for a star magazine. Some walk along the shore under a mad sun like penitents, except that they wear daring swimwear. Others dive the cliff repeatedly like the first-five are different from the next-ten (oh my, love their guts!). Some stage their culinary inclinations by grilling meat and all sorts of easy cooking menu. Others take time, drink a can or two of beer or take a shot after another of whisky. Some feast on culinary experiments while others fill their stomachs with their packed lunch and snacks.

My Fortune Island getaway was more like exploring the immensity of nature with souls lost in the present. How a possibly abandoned island could host the children of the millennia is breathtaking. How in turn the latter would suffice at what the former offers is simply magnanimous. Exploring the island’s immensity is quite an experience worth noting for reference. Learning to love nature regardless of its intensity in beauty is charity. Living in the moment for a while is mortification from the depths of the future.