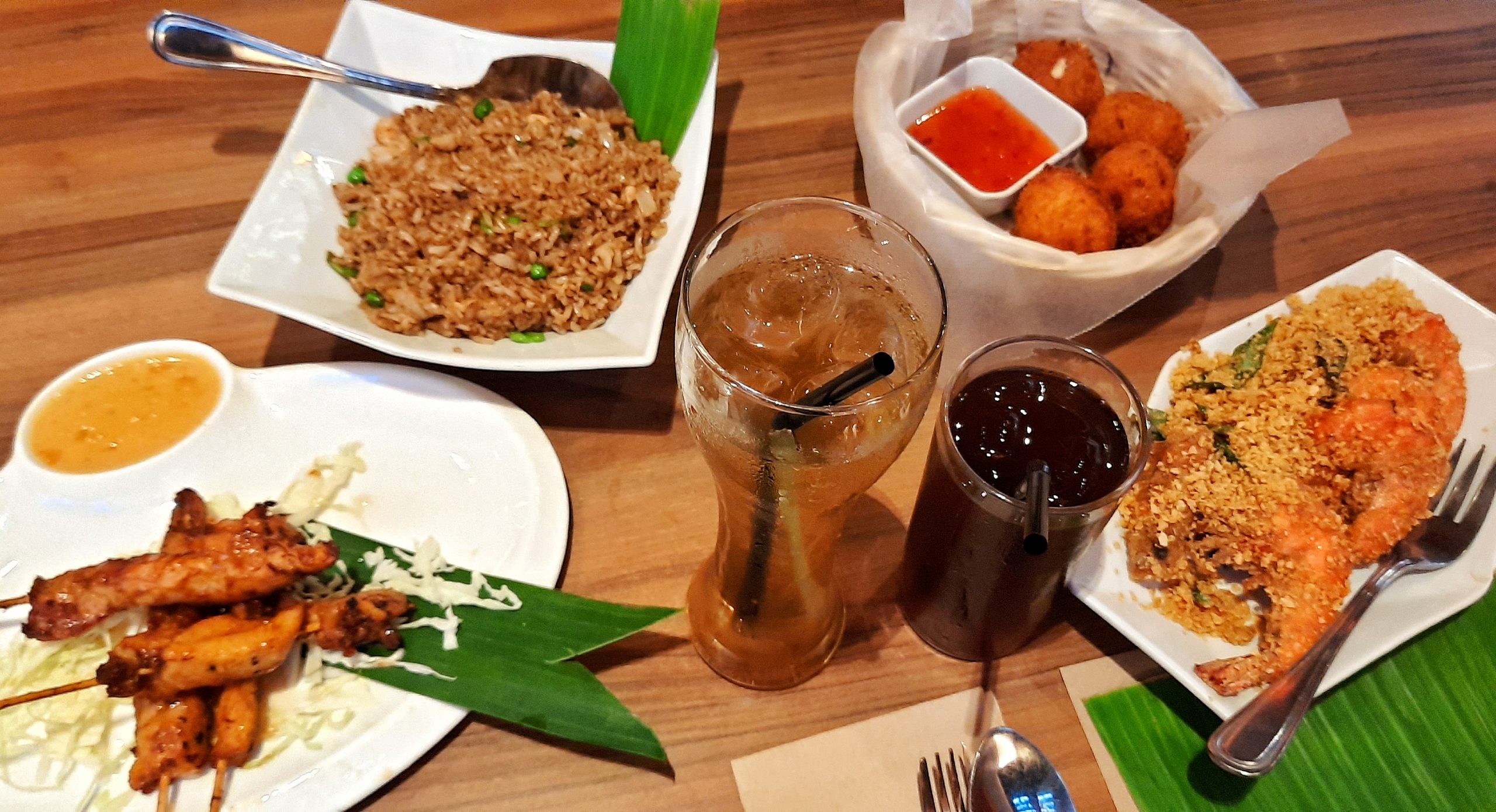 Banana Leaf: A Fusion of Flavours

Want something to distract your tastebuds? I discovered Banana Leaf, which can exactly do that for you at the Lower Ground Floor of SM Aura Premier in Bonifacio Global City (BGC), Taguig.

My friend and I were passing by rows of restaurants, hunting for comfort food. Suddenly, we saw on the screen at the façade of Banana Leaf what appeared like a crispy ball. At the monitor, the ball was being sliced and some thick, flavourful cheese oozed from it. Then, an array of prawn menu flashed on the screen. Some seemed like buttered garlicky, others like I wasn’t really sure. They sent funny confusion in my mind, and profound interest. But they all appeared so palatable that I wanted to grab some. We halted to a stop and locked eye contact. We sort of knew outright what we wanted.

While we were being seated, I observed that Banana Leaf had less crowd. Silence swayed like music. Or maybe there was that symphony, so low in tune, so calming that I thought there was silence. Some diners were either like engrossed on their food or searching for a clue on a riddle. Such impression sent mixed emotions to my cerebrum. What if, they were silent because the food was not that great. But how would I know, I sort of debated with myself. Then, I heard my friend stating for a fact to an accommodating crew that, “We want this, this and this. We’ll try this for starters.”

The crew asked for our drinks, and announced with pride that diners keep coming back for their Iced Lemongrass with Honey. While I was figuring out the difference of her offer and the hot lemongrass tea at home, the crew assured me that Banana Leaf’s Iced Lemongrass is brewed, and it is the best in Asia. “That must be interesting,” I wanted to say. “Wow!” I stuttered.

We ordered (1) Vietnamese Prawn Ball with Cheese; (2) Stir Fried Prawns in Singaporean Chilli Sauce; (3) Thai Style Fried Rice with Shrimp Paste; (4) Chicken Satay; and (5) Iced Lemongrass with Honey for me, and Bottomless Iced Tea for my friend. (We didn’t order desserts. We intended to do it over coffee at a nearby coffeeshop.)

These were served hot, enough to surprise your tongue. Crispy on the outside, and sort of creamy inside, these balls were so lucious that you’d taste the texture of blended prawn, wrapped around and between four cheeses, then soaked in corn flour. Note that it could set your appetite miles per second.

I loved this. I thought the toppings were garlic or something of the same species. No. These made the prawns more interesting and real mouth-watering.

Steamed rice sauteéd in oil and stirred with the green peas, chicken shreds, shrimp and shrimp paste, then flavoured with spices. Was it Worcestershire sauce that kind of lingered for a while? And oh! There were thin and circular strands of red chilis. How’s that for your rice? You can even eat it on its own.

Savor these pallate-tickling marinated skewers. This satay had complex flavour usual in Indonesian cuisine. Served hot, my tastebuds relished on that particular tang, which the marination brought.

Iced Lemongrass controversy. It was actually refreshing. Expect a mild tinge of lemongrass leaves. There was little amount of honey, which was actually enough to experience the lemongrass magic. To be dubbed as Asia’s best? I’d like to ask for an SOS on this. Bottomless Iced Tea. It tasted Nestea apple, which Banana Leaf adopted as its regular house blend.

Banana Leaf is a fusion of modern Malaysian, Singaporean, Thai, Indian, Vietnamese and Indonesian cuisines. I knew now why there was some kind of solemnity inside its perimeter. By experiencing a kind of exotic taste, the kinetic aspect sent signals to the brain, wondering what the taste really was. In sum, the flavours boil down to a fusion of something sweet, salty, spicy, sour, and a particular spice (known only to Banana Leaf), which sets them all in motion. In doing so, these carry intensity. So, the mind would like to distinguish what distinct taste actually transpired.

The use of banana leaves as plates was remarkable. However, it would compliment such practice should Banana Leaf partner them with paper/bamboo straws, instead of the plastic ones. Besides, it could greatly help the environment. During the process though (I’m hopeful), the crews may ask the diners whether they like to use plastic straws, because not everyone is fond of them.

Did you know that Banana Leaf has other branches? Find one near you, and have a fulfilling experience like we had.